On the 18h of September the official launch of the 7th Edition of the Ethics & Trust in Finance Global Prize(*) took place at the OECD Conference Center in Paris.
Full program

The launch was an opportunity to remind people about the purpose of the Prize which since 2006, on a biennial basis, invites young authors – under 35 – to think and submit essay entries about the role ethics and trust play or should be playing in the finance broadly understood. The targeted audience come from very different horizons, professional backgrounds, cultures, geographic locations, with the one common denominator that they all belong to the world in finance. The essay competition provides an opportunity for expression of these different expertise, sensibilities and experiences.

The deadline for handling in the final paper is set to 30 of June 2019 at www.ethicsinfinance.org. 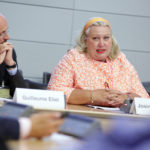 Mrs. Josina Kamerling (CFA Institute, Co-President of the Prize’s Jury) made the point that regulation alone is not enough and that a cultural shift is required to raise ethical standards in the financial industry. Referring to a study on behaviour patterns in finance, she expressed concerns that excessive uniformity in educational backgrounds among financial professionals feeds herd thinking and behaviour, which in turn, inhibits ethical awareness. Therefore, training and professional institutions have a key role to play to encourage critical thinking and a sense of responsibility and empowerment among the young generation to make finance serve a sustainable society. 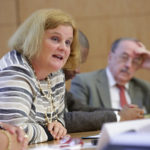 Mrs. Mathilde Mesnard (Deputy Director for Financial and Enterprise Affairs, OECD) stressed in her keynote speech the persistence of an important trust deficit in finance ten years after the crisis and explained how governments and business can address it. She pointed out that, despite the reforms undertaken, financial misconduct continues to develop, as illustrated by the big fines inflicted to corporate actors during the last ten years. In order to address this issue, governments and businesses have elaborated global standards to encourage ethical conduct and enhance trust. These standards contribute to improve financial stability, financial inclusiveness, innovation and long-term business performance. 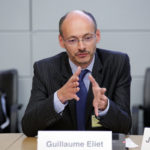 Mr. Guillaume Eliet (Head of Regulatory, Compliance and Public Affairs, Euroclear) emphasized two important elements on the current agenda. First, while acknowledging the great efforts made to regulate the financial industry in all areas, he expressed concerns that there may be no more room for individual judgment (or ethical appreciation) in the implementation of these rules, the risk being to encourage a compliance based “tick the box” attitude. Second, he raised the important issue of data, pointing out the sometimes contradictory aims of different regulations (e.g. due diligence for money laundering versus data privacy law). Thus, he calls for a critical reflection on what kind of attitude we adopt towards data. 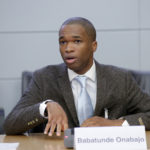 Mr. Babatunde Onabajo (First Prize Winner in 2017) pointed out that the rise of a cashless society is at the forefront of the agenda. He raised the question whether a cashless society can really be considered as inclusive, given the fact that it may lead to exclude older people who represent a large part of the population and who are not able or willing to use cashless means of payment. Another related key issue is cybersecurity, the risk being to be increasingly exposed to hackers while we move to a cashless society. 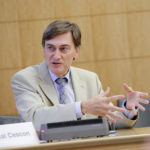 Mr. Pascal Cescon (Chief Ethics Officer, Banque de France) stressed the fact that the high number of different financial regulations make implementation increasingly challenging and therefore are now perceived by central bankers as requiring an overall simplification. In addition, he also pointed out the challenge of different national cultures in the implementation of regulations and the need now identified by central bankers to develop exchanges of supervisors, not only to be more efficient and but also to experiment cross-cultural differences. Mr. Cescon also reported central bankers raising concerns about the limits to effectiveness of the mounting tide of regulations, if it remains unmatched by the parallel empowerment of players in ethical judgment on the spot. 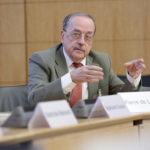 Mr. Pierre de Lauzun (General Delegate of the French Financial Market Association) emphasized the absence of ethical message in financial regulations and the difficulty to develop ethical norms in the private sector. This ethical deficit is illustrated by the persistence of the “too big to fail” problem that allows individuals or institutions to take excessive risks motivated by the aim to make big profit in a short period time, without having to bear the consequences. This problem is rendered even more acute by the difficulty of measuring the impact of financial activities. Prof. José Luis Fernàndez Fernàndez (Comillas Pontifical University) critically reflected on the intellectual approach to finance in academia, shedding light on the deep connexion between the epistemological and moral dimensions of finance. He pointed out that the way finance is being taught in business schools is not able to address the challenges that humanity is facing in the coming future, since it is still based on the double assumption of the efficiency of the markets and the optimal allocation of resources. He calls for a critical assessment of this dominant paradigm so that finance can serve the common good and contribute to sustainable development.

(*) The Prize is an endeavor of the Observatoire de la Finance (www.obsfin.ch) – a Swiss non for profit foundation – with a firm supported of its strategic partners: CFA, Euroclear, OECD and Swift/Swift Institute.