On the 21st of September the International Monetary Fund has co-hosted the Award Ceremony for the 5th edition of the global Ethics in Finance Robin Cosgrove Prize at its headquarters in Washington. 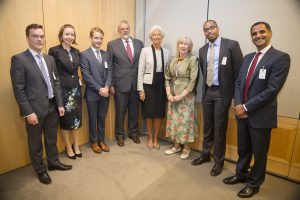 Prior to the Award Ceremony itself, Mrs Christine Lagarde met with the winners and with Dr. Carol Cosgrove Sacks and Prof. Paul Dembinski, co-Presidents of the Prize.

Mrs Christine Lagarde – Managing Director of the IMF – had the opening words to the Ceremony stressing the importance that ethics has to play in changing the culture of a sector through which the crises started. Mrs Lagarde also praised the initiative of Ethics in Finance – Robin Cosgrove Prize for its longstanding commitment (10 years) to stimulate young professionals and academics to think in an innovative way about ethics in finance.

Followed a video message by The Most Rev. Justin Welby, Archbishop of Canterbury who stressed the responsibility that goes with power and size of institutions and also underlines the dangers of a temptation of a “box ticking” culture of compliance which prevents ethics rather than encourages it. Then a panel discussion took place on the theme “Role of Ethics in Finance”moderated by Sean Hagan, General Counsel of the IMF and with participation of :

The Award part of the Ceremony was introduced by Dr. Carol Cosgrove-Sacks – mother of Robin Cosgrove and professor at the College of Europe (Bruges) who has cooperated with the Observatoire de la Finance since 2005. The first edition of the “Ethics in Finance – Robin Cosgrove Prize” was launched in 2006.

The 5th edition 2014-2015 attracted more than 300 expressions of interest and more than 100 papers. In the final phase of its work the Jury composed of 22 world class personalities, worked on a short list of 11 papers, from which it awarded 5 prizes.

The essays have been published in a special issue of Finance & the Common Good / Bien Commun, review of the Observatoire de la Finance (editorial Sense of urgency, by C. Cosgrove-Sacks and P. H. Dembinski).

The winners essays were:

Essays of the Finalists: