The Ethics & Trust in Finance Prize – formerly “Ethics in Finance – Robin Cosgrove Prize” – promotes greater awareness among young people throughout the world concerning the benefits of ethics in finance. It aims to encourage high-quality management of banking, insurance and financial services based on trust and integrity. Launched in 2006 and now in its 7th Edition, this global competition for innovative ideas on ethics, responsibility and trust in financial activities is open to young people, aged 35 years or younger, from throughout the world – professionals as well as young academics

The competition invites creative papers setting out analyses or proposals for innovative ways to promote ethics & trust in finance. The Jury allocates the prize money of USD 20,000 among the winners.

The Prize today is a well recognized and highly respected endavour. To date, in its global edition, the Prize has awarded 22 distinctions to outstanding authors coming from all continents.

In 2015, the International Monetary Fund [IMF], co-hosted the award ceremony for the 5th edition(2014/2015) of the global Ethics in Finance Prize. The Ceremony took place at the IMF headquarters in Washington, USA, at a special event on the 21st September 2015. Ms. Christine Lagarde, Managing Director of the International Monetary Fund, gave a keynote address and congratulated the Prize laureates.

In January 2018, the award ceremony of the 6th edition(2016/2017) was hosted by the Banque de France at its headquatrters in Paris. The Governor of Banque de France, Mr. François ViIlleroy de Galhau and Mr. Angel Gurria, the Secretary-General of OECD, gave keynote addresses and congratulated the winners.

CFA, Euroclear, Swift/Swift Institute  and ACCA are actively supporting the Prize and promote it to their members, teir staff and to the wider financial services audience and corresponding academic institutions. Many other financial organizations across the world are promoting awareness of the Prize to their stakeholders and their younger staff.

Since its inception, nearly one thousand individuals have expressed interest in submitting a paper for the Prize from over 80 countries. Final submissions considered by the global Jury have been in excess of 300.

The deadline for handling in the final paper for the 7th edition is set to 30 of June 2019.

The management of the Prize is carried out by the Observatoire de la Finance, which is a Swiss not-for-profit foundation, and home of the manifesto entitled ‘For finance that serves the common good’. The distinguished international Jury of experts in ethics and finance is co-chaired by Mrs Josina Kamerling (CFA Institute, Brussels) and prof. Paul H. Dembinski (director of the Obervatoire de la Finance, Geneva)

The Award Ceremony took place on 18 November 2019 in Paris, at the OECD Conference Center
More information 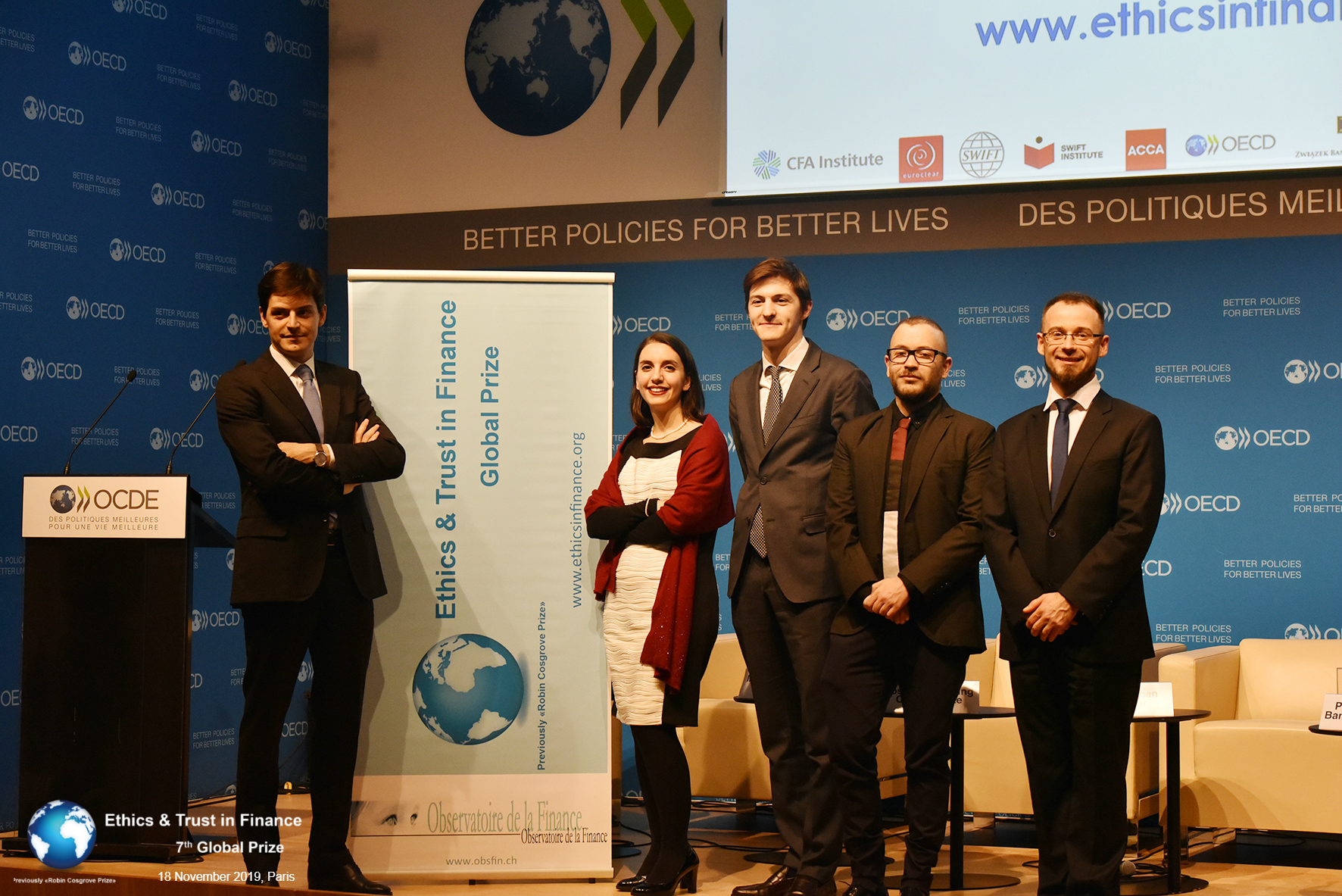